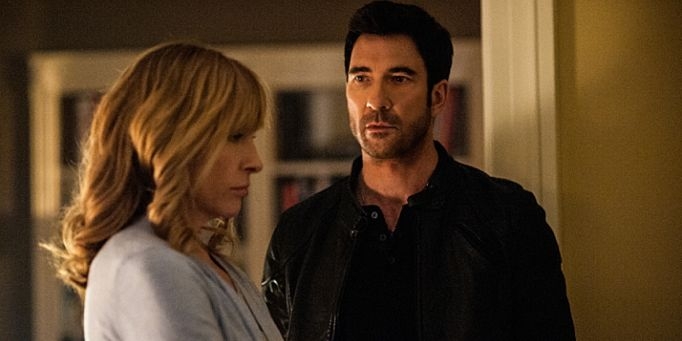 Toni Collette stars in a show that contains a challenge for all thoughtful Christian parents.

Hostages is the Nine Network’s answer to Seven’s Agents Of S.H.I.E.L.D. and personally I think they may have over-judged its punching power. Despite having an incredible Australian actress in the role of the heroine, the episodes to date aren’t delivering the fever-pitch the title promises. But Hostages’ storyline still asks an important question: who or what are we supposed to value above everything else?

Toni Collette stars as Doctor Ellen Sanders, a top-notch Washington surgeon who’s been singled out to operate on the President of the United States. However, the night before the most powerful man in the world goes under the knife, Ellen arrives home to discover her husband and children have been taken prisoner by terrorists. They now control her house and the lives of those closest to her. Their demand is that she ensure the President never wakes up.

The season-opener introduced the good doctor naturally distressed and playing for time. But as the second and third episodes roll out on Australian airwaves, its becoming increasingly apparent that, like recent hits Homeland and The Blacklist, the real traits of each character will emerge slowly. As it turns out, Doctor Ellen’s family is not as squeaky clean as it seems, and the terrorists are not as bad … if you forgive them all that gun-wielding, duct-taping stuff, of course.

Who's in first place?

Straight up, though, Hostages’ motivation is really quite clear. Regardless of Ellen’s family problems, her driving force is that of a mother watching a gun pointed to the head of her children. These are being balanced against her competing motivations – that people with guns shouldn’t be allowed to defy the law, that terrorism is a horrible, self-defeating form of social change, and that as a doctor she should be about saving lives not ending them. But Hostages puts her character at the point of greatest tension between parenthood and principles, and asks her to choose. Which is more important? Now, for most viewers, it will ultimately end up a ‘no question’ question – but not for Christians.

That’s one of the really embarrassing things about the Christian faith. I’m not really worried when someone starts saying things like, “Jesus – the only way? Really?” Truth is, by its very nature, exclusive. But if someone says something like, “Didn’t Jesus tell you to hate your kids?” – then I get a little nervous. “Oh, you mean Luke 14:26?”

“If anyone comes to me and does not hate father and mother, wife and children, brothers and sisters – yes, even their own life – such a person cannot be my disciple.”

In our society, the love of a mother for a child has been so venerated that it’s just unthinkable that Toni would choose a President, a strongly held belief, or even ‘the right thing’ over her son and daughter. Strangely, we don’t feel as strongly regarding the child’s love for a parent – score one for western individualism! – but there are other societies that will. In any case, however highly we hold these beliefs, we don’t believe they’re meant to come between us and caring for our nearest and dearest. However, that’s the shocking distinction Christianity has been making for two thousand years.

I could point you to the numerous cases recorded in Foxe's Book Of Martyrs where Christian parents have been prepared to see their children go destitute, suffer and even die rather than recant their faith in Jesus. Believer or not, your heart might still reject them as unreasoning radicals. But really, the answer can be gotten from the same person who poses the problem. Jesus wants us as loving parents to feel the tension that thrums through Hostages, but in relation to His teaching. Straight after this verse, He tells people to consider the seriousness of following Him before setting out. It could cost them everything; for many it did.

But what’s the alternative? Well, as the episodes tick on in Hostages, you can be pretty much assured that viewers will forgive Doctor Ellen anything so long as she keeps those kids front and centre. But what will she end up teaching them? A way of prioritizing life that puts themselves, or at least their loved ones, at the very top? This is the position Jesus says He needs to occupy in our lives if we’re going to have any chance of salvation.

One of the interesting flukes of history is what it can throw up. Historians actually have the prison diary of a 3rd century woman from northern Africa called Perpetua who was arrested by the Governor of Carthage and executed at a public celebration. She, like Toni’s character, had a son and he was so young that it appears his survival was in question if his mother wasn’t prepared to sacrifice her principles. In fact, those principles seemed likely to destroy the entire family. You see, Perpetua was a Christian and she, unlike Toni’s character, was being asked to support the Emperor, by rejecting Jesus. Knowing what’s ahead, Perpetua records this conversation with her father days before she was gored by animals and dispatched by a gladiator:

Now, that is the sort of real life drama the Nine Network could only dream of. We have no way of knowing whether Perpetua’s son survived. But if he did, you can be certain that he would have grown up knowing that Christians know who comes first, and the best thing we can do for our children is to point them to Him.

Watching Hostages with your kids

All the usual caveats apply with watching an M rated program like Hostages with your children. That said, if older ones are interested, think about testing them with one of these: