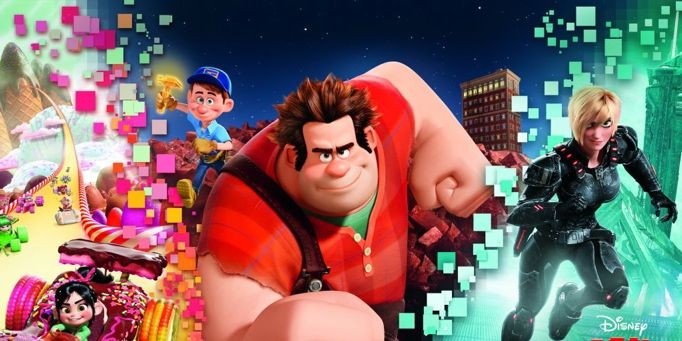 In Toy Story, we learned about the secret life of spacetoys and Barbies; in Wreck It Ralph, we realise what video games do when the power goes off. Ralph, voiced by John C. Reilly, is a ham-fisted home wrecker who has to be defeated every time kids push a coin into his arcade machine. But Ralph is tired of being a bad guy and wonders what it would be like to be the sort of character who was celebrated for a change. “It’s really hard to love your job,” he tells the audience, “when no-one appreciates you for doing it.”

Ralph travels down his game’s power cord to mingle with the off-duty characters of a dozen other electronic amusements. He takes it into his head that what he really needs to do to be valued is earn a gold medal, and that sees him hop from one game to the next. But when his chances of gaining his goal lead him to cross paths with a malfunctioning girl racer called Vanellope, his values begin to shift. Will he become the hero he wants to be, or the friend she needs him to be?

Wreck It Ralph is more than just a fun cartoon, it’s a superbly subtle consideration of what it means to succeed as a human being. Vanellope is Disney’s version of a child with disabilities. Everyone normal considers her a glitch in an otherwise perfect world, but it’s not her fault she suffers from ‘pixlexia’. She’s also the victim of several common arguments for caring for the disabled that do more harm than good. Ralph is told that other well-meaning characters just want to protect her from harm, from the disappointment of over-high expectations. In reality they wish to protect themselves.

In Wreck It Ralph, we discover a level of contentment with who God has made us to be that is often lacking in a perfection-centred world. Rather than hide Vanellope away, Ralph decides to let her have her chance rise above others’ expectations. He also comes to realise through accepting her differences that he can also accept who he was designed to be. Or as my eight year old put it on the way out of the cinema, “You don’t have to try to be someone else. You are good how you were made.”

Wreck It Ralph is my vote for the best children’s animation to come out this year. There are a few scary moments when Ralph enlists in a space marine game that might disturb pre-school children, but otherwise it’s safe viewing all round. It’s also good material for asking the questions: