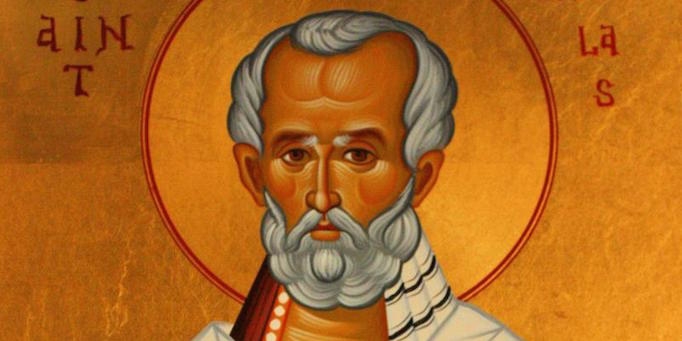 Who was St. Nicholas?

Why Christian parents need to know the connection between Saint Nick & Santa Claus.

The unsatisfying answer to the title of this post is that nobody knows for sure.  To quote one Nicholas scholar “We can grant a bishop of that name who had a great impact on his homeland.  We can also accept December 6 as the day of his death and burial.  These are all the facts we can hold to.  Further we cannot go.” (Gustav Anrich quoted by Charles W. Jones in Saint Nicholas of Bari, Myra, and Manhattan).

According to the best estimates, Nicholas, was born around 280 AD in Patara, in Asia Minor.  He later became bishop of Myra in modern day Turkey. Nicholas, it seems, died about 343 on or near December 6.  That is the date of his Feast Day in the Catholic church.

There is no record of his existence attested in any document until the 6th century.  By that time Nicholas, whoever he had been, was already famous.  The emperor Justinian dedicated a church to him in Constantinople.  Initially, Nicholas was most well known in the East.  But by 900, a Greek wrote “The West as well as the East acclaims and glorifies him.  Wherever there are people, his name is revered and churches are built in his honor.  All Christians reverence his memory and call upon his protection.”  In 1087, Italian sailors stole his supposed relics and took them from Myra to Bari, Italy.  This greatly increased his popularity in Europe and made Bari one of the most crowded pilgrimage sites.  It is said that Nicholas was represented by medieval artists more than any other saint except Mary.

The Man and the Myth

Why was Nicholas so famous?  Well, it’s impossible to tell fact from fiction, but this is some of the legend of St. Nicholas:

He was reputed to be a wonder-worker who brought children back to life, destroyed pagan temples, saved sailors from death at sea, and as an infant nursed only two days a week and fasted the other five days.

Moving from probable legend to possible history, Nicholas was honored for enduring persecution. It is said that he was imprisoned during the Empire wide persecution under Diocletian and Maximian. Upon his release and return, the people flocked around him “Nicholas! Confessor! Saint Nicholas has come home!”

Nicholas was also hailed as a defender of orthodoxy. Later sources claim he was in attendance at the council of Nicea. According to tradition, he was a staunch opponent of Arianism. Writing five centuries after his death, one biographer wrote “Thanks to the teaching of St. Nicholas, the metropolis of Myra alone was untouched by the filth of the Arian heresy, which it firmly rejected as a death-dealing poison.” Stories of his courage abound, one claiming that Nicholas traveled to Nicea and, upon arrival, promptly slapped Arius in the face. As the story goes, the rest of the council was shocked and appalled, so much so that they were going to remove Nicholas from his bishopric, that is until Jesus and Mary appeared to defend him. According to the same legend, this apparition changed the minds of the  delegates who quickly recanted of their outrage.

As you might have guessed, Nicholas was also revered for being a generous gift giver. Born into a wealth family, he inherited the fortune when his parents died.  Apparently he gave his vast fortune away.  The most famous story involved three girls who were so destitute that they were going to be forced into a life of prostitution.  But Nicholas threw three bags of gold through the window as dowries for the young woman.

Over time, Saint Nicholas became the patron saint of nations like Russia and Greece, cities like Fribourg and Moscow, and of children, sailors, unmarried girls, merchants, and pawnbrokers (the three gold balls hung outside pawn shops are symbolic of the three bags of gold).

In honor of St. Nicholas the gift giver, Christians began to celebrate December 6 (his feast day) by giving presents. The tradition developed over time.  For good boys and girls, St. Nicholas would come in his red Bishop’s robe and fill boots with gifts on the night of December 5.  For bad boys and girls St. Nicholas was to be feared.  In highly catholic parts of Europe, St. Nicholas became a deterrent to erring young children.  In Germany, he was often accompanied by Knecht Ruprecht (farmhand Rupert) who threatened to eat misbehaving children.  In Switzerland, St. Nicholas threatened to put wicked children in a sack and bring them back to the Black Forest.  In the Netherlands, St. Nicholas’ helper would tie them in a sack and bring them back to Spain.  In parts of Austria, the priest, dressed up in Christmas garb,  would visit the homes of naughty children and threaten them with rod-beatings. At least nowadays, he only checks his list!

Not surprisingly, the Reformers were less than friendly towards the traditions that had been built up around the saints. Luther rejected the saints’ days, believing they were built upon legends and superstitions (and a virulent strain of moralism we might add). In Germany, Luther replaced Saint Nicholas’ Day with a different holiday, Christ Child, or Christkindl.  Ironically, Kriss Kringle which derived from Luther’s Christ Child holiday, has become just another name for St. Nicholas.

From St. Nicholas to Santa Claus

The cult of St. Nicholas virtually disappeared in Protestant Europe, with the exception of one country: the Netherlands. If you love Christmas with all the trappings of Santa Claus and stockings and presents, thank the Dutch. If you despise all that, try to ignore my last name for the time being. The Puritans had done away with St. Nicholas and banned Christmas altogether.  But the Dutch held on to their tradition and brought it with them to the New World.  In the Netherlands Sint Nicolaas was contracted to Sinterklaas.  According to Dutch tradition, Sinterklaas rides a horse and is accompanied by his helper Zwarte Piet, or Black Pete.  Many people consider Black Pete a racist stereotype derived from slavery, although others claim he is black because he goes down the chimney and gets a face full of soot.

At any rate, it is easy to see how Sinterklaas evolved in America to Santa Claus. Santa Claus became the Santa we know in the United States only after the poem “Twas the Night Before Christmas” was written in 1823. Possibly the best known verses ever written by an American, the poem has greatly influenced the tradition of Santa in the English speaking world and beyond.

How should Christians relate to the traditions of Santa Claus? C.S. Lewis embraced them and so included Father Christmas in The Lion, the Witch, and the Wardrobe. Other Christians, fearing syncretism, stay clear of Santa, reindeer, and a tree full of presents. I’ll leave it to you and your family to form you opinions on observing the Christmas holiday (see Rom. 14:1, 5-6). Personally, we try to walk in the middle of the road on this one: we don’t teach our kids about Santa, but we are happy to enjoy It’s a Wonderful Life, a couple Christmas trees, and a little Bing Crosby. And if the kids, picking up bits and pieces from other places, end up listening for flying reindeer landing on the roof, we’re not going to introduce the laws of physics to crush their anticipation. Most of all, of course, we try to press home that Christmas is about Christ.

But if you have a lot of Santa Claus around, why not use him to your benefit and talk about the real St. Nicholas. We don’t know a lot about him, but we know he lived and was revered. According to legend-one of those stories that probably isn’t true, but should be–when Nicholas was little boy he would get up early in the morning to go to church and pray.  One morning, the aging priest had a vision that the first one to enter the church in the morning should be the new bishop of Myra.  When Nicholas was the first to enter, the old priest, obeying the vision, made the young boy bishop right on the spot.  But before he consecrated Nicholas a bishop, the priest asked him a question. “Who are you, my son?”  According to tradition, the child whose legend would one day become Santa Claus replied, “Nicholas the sinner.” Not bad for a little boy.

With what little we know about St. Nicholas, it is safe to say he would not be pleased to know he had eclipsed Christ in the hearts of many as the central figure of Christmas. For the Bishop of Myra no doubt knew the angel’s words to Joseph: “Mary will give birth to a son, and you are to give him the name Jesus, because he will save his people from their sins.” So this Christmas, give gifts if you like. We will in our family. Receive them all with thanksgiving.  But do not forget what we need most–salvation through substitution. This is one gift the real St. Nicholas would not have overlooked. 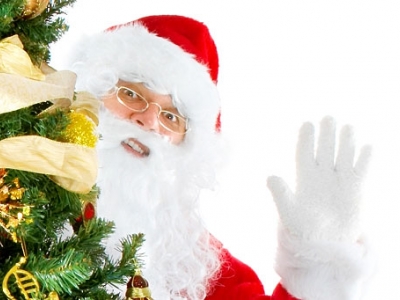 What to Tell Your Kids About Santa

How, what and when tell the kids about Santa 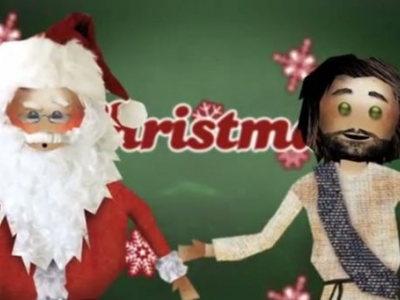 They both have beards and give gifts, but that's where the similarities end. 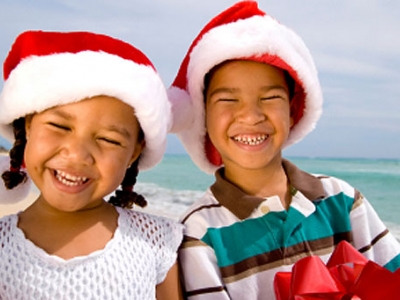 How much should you spend on gifts? Should you go to church? What about Santa? Steve & Penny Morrison share their thoughts.
ADVERTISEMENT