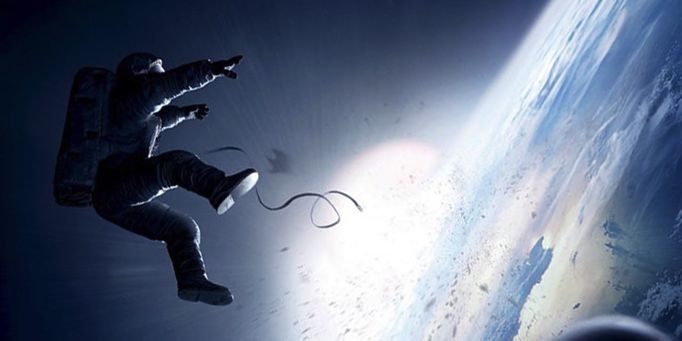 It’s easy to see why Gravity has earned the universal acclaim of critics and filmmakers across the planet – a thrilling script, multilayered performances and mesmerizing production values. More importantly, though, it taps into our greatest fear of dying alone. But does it also unknowingly hint at our greatest hope?

Sandra Bullock stars as Dr. Ryan Stone, a medical engineer on her first trip into space. A technology she developed for medical scanners is now being installed on the Hubble space telescope. Overseeing her work is space shuttle commander Matt Kowalsky, a veteran astronaut enjoying his last mission. George Clooney expertly conveys both Matt’s jovial nature and his much needed calm in a crisis. When the destruction of a Russian satellite results in the creation of a field of space junk travelling at the speed of a bullet the mission morphs into a race for survival. The debris destroys the shuttle and kills the crew, leaving Ryan and Matt stranded in orbit. Now they face a freezing journey between space stations with oxygen supplies dwindling and the debris field returning in 90 minutes. But the deadly void isn’t completely empty. It also contains vital lessons about how to live the life you’re given.

Director, writer, producer and editor Alfonso Cuarón was the mind behind the visionary Children Of Men and the most visually interesting Harry Potter, The Prisoner of Azkaban. Together with his scriptwriter son Jonás, he has produced a film that does for space what Alien did for the extraterrestrial. Gravity reminds us that the world we inhabit is a paradise in the stars, uniquely designed for the benefit of human beings. By contrast the blackness that surrounds our planet is devoid of sound, warmth and the physical forces that provide our essential equilibrium. Flawless computer generated imagery recreates a truly terrifying anchorless environment. The film’s title not only refers to the primary force that provides our sense of stability, but the grave situation we find ourselves in when it is removed.

Given the threatening nature of its setting, it’s not surprising that Gravity falls into familiar ‘triumph of the human spirit’ territory. Just like The Shawshank Redemption assured us we had to, ‘Get busy living or get busy dying,’ so Commander Kawalsky tells Dr. Stone that she chooses to live then she has to, ‘Get busy and get going.’ So Sandra Bullock’s character finds herself in a moment of crisis composing something of a farewell speech to her dead daughter,

You tell her, her mamma is so proud of her. She’s my angel – and I’m not quitting.

And the Cuaróns round of this sentiment with an awesome and uplifting hymn-like soundtrack from composer Steven Price – Academy Award worthy in its own right. But what I find more interesting personally is the bits that emerge in between these heroic triumphs.

At three stages during the film – moments of the greatest stress and the least control – Dr. Stone reaches for something other than her own will to live. During one, her fear reveals to her just how little time she has spent investing in what comes next:

At another, climactic moment she simply offers up the words, “Thank you.” – but to who?

I’m not suggesting that Gravity secretly acknowledges the existence of God. Far from it; the only god it praises is the human drive to survive. However, as a scriptwriter, I can imagine the Cuaróns writing the dialogue and inserting what they thought someone would actually say at various points. In doing so they accurately record how readily we turn to God when we realise how precarious our existence is. Gravity is all about the physics that determine our survival. If there is an invisible force acting on the human soul, then it is the pull of His love for us and our need for Him.

Watching Gravity with your kids

Gravity is just the sort of thriller than parents and teens could enjoy together. I’d plan a conversation around one of the following:

When Dr. Stone is all alone, what does she have left?
What is it that Dr. Stone relies on to survive? Does it really account for her survival?
How differently would a Christian face such a complete loss of control?