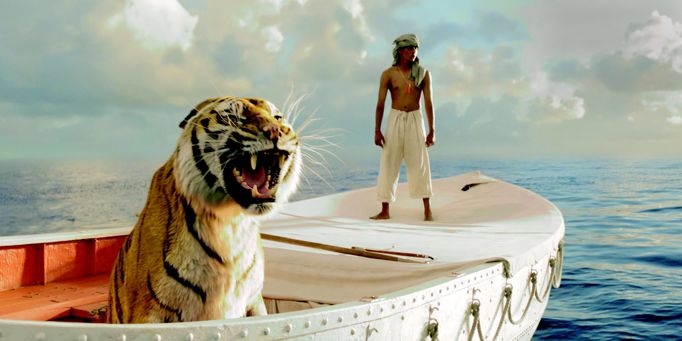 Life of Pi is as beautiful and epic a film journey as you could wish to see. It’s also a lie as glorious and inspiring as any uttered in the Garden of Eden.

Based on the Man Booker Prize-winning novel by Yann Martel, this extraordinary tale centres on the experiences of Pi Patel, a fourteen-year-old boy who grows up in his father’s zoo in Pondicherry, India. Facing an uncertain economic future, his father decides to sell the animals and move Pi’s family to Canada. However, the Japanese freighter he is travelling on sinks in a storm, leaving Pi adrift in a lifeboat with a ravenous Bengal tiger for 227 days. The film centres on not only his extraordinary tale of survival but the inspiring spiritual journey he makes in the process of coming to terms with his failures, fears and thousands of miles of Pacific Ocean.

Director Ang Lee has helmed what I had begun to consider to be a virtual impossibility in this day and age: a 3D film that actually makes good use of the technology. Lee takes the audience inside, above and beneath Pi’s lifeboat in a way that well explains why a picture can be worth a thousand words. A single shot of the hero’s vessel becalmed between a starry sky and the mirror surface of the deep is likely to stay with me for a lifetime. This director has had some duds – The Ice Storm, Hulk – but this is not one of them. Not surprisingly, Life Of Pi has already accumulated three nominations for Golden Globes, and Academy Awards won’t be far behind.

A little bit of everything leaves you with nothing

Sadly, though, Life Of Pi is ultimately a breathtaking attack on the gospel. As a young boy, Pi becomes a follower of first Hinduism, then Christianity and finally Islam. The logical impossibility of this situation is not lost on Pi’s atheist father who tells him, “Believing in everything at the same time is the same as believing in nothing".

But for Pi, faith is a personal journey and his attraction to Jesus doesn’t prevent him from embracing the comfort Vishnu and the Prophet offer as well:

“The longer I listened to the priest, the more I came to like this Son … I came to faith through Hinduism but god wasn’t finished with me yet and introduced me to himself under the name of Allah.”

If this sounds confusing from a Christian viewpoint, then rest assured, it will be just as perplexing to a Hindu and a Muslim. In reality, Indian Pi is expressing none of these great faiths faithfully, but actually giving voice to a very Western syncretism. It presents itself as an accepting, tolerant faith, but can only exist by raising itself above the founders of the great faiths. In short, Pi loves Jesus, but never listens to him. Otherwise he would have a great deal of trouble reconciling His definitive warning to those who would selectively follow Him:

“I am the way, the truth and the life. No-one comes to the Father except through me.”

Life of Pi is a thoroughly western catechism. It offers a belief system that concentrates solely on how the divine makes us feel, dipping into the world's religions for those parts that impress us without pausing to hear what they require. Its tale of a relationship forged between a boy and a tiger in the furnace of survival is stirring and attractive. Undoubtedly, some will be swept away in admiration just by the involvement of such a beautiful beast. But the real tragedy is that while most films simply reflect their worldview, this is a distinct attempt to teach, and so is far more insidious. We can project Christian meaning on Life Of Pi and use it to reflect Christian truths, but its own perspective is that Christianity doesn’t matter. Christ’s sacrifice, the innocent for the guilty, was the antithesis of love. As Pi puts it, something that ‘makes no sense’.

Watching Life of Pi with your kids

Life Of Pi has some disturbing elements to its storyline that I wouldn’t recommend for children outside of the final years of high school. However it would be worth using it as a tool to help young adults discern the dangers of syncretism: