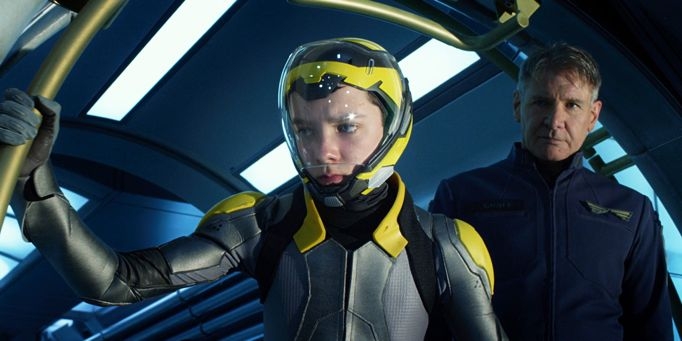 Somewhere in earth’s future, an officer in the planet’s International Fleet oversees an orbital school of gifted children including one quietly spoken Andrew ‘Ender’ Wiggin. The colonel intentionally creates situations that make life difficult for his young charge, resulting in his isolation from most children and the hatred of some. However, the officer does so because he’s hoping through this discipline, Ender will discover the courage and conviction necessary to lead others in a world facing annihilation.

Sound like pure science fiction? Certainly, it’s the plot of Hollywood blockbuster Ender’s Game. But it also happens to be a reflection of the real life story faced by many Christian parents…

Ender’s Game is based on the 1985 Nebula and Hugo Award winning novel by Orson Scott Card. Asa Butterfield stars as Ender, a quietly brilliant third child from a family of prodigies. He grows up in a world shaped by humanity’s hairs-breadth victory over an invading alien race and the fear that the insectoid ‘Buggers’ will one day return. Every resource is now bent towards preparing for that eventuality, including earth’s children. Harrison Ford and Viola Davis star as officers from the International Fleet who are searching for a much needed military messiah. They send Ender to a strategy school where he must battle his fellow students to prove he has the leadership qualities they’re looking for. But what Colonel Graff and Major Anderson keep secret is that not all the games Ender plays are as innocent as they seem.

Ender’s Game is a thrilling and complex tale that’s certain to earn the title ‘benchmark’ science fiction. Like most tales in this genre, though, it uses the future as a setting to consider very current problems. In particular, the film raises the question of laying the burdens of adult conflicts on young shoulders. Davis’ Major Anderson wonders at the morality of creating child soldiers but Ford’s gruff Colonel Graff maintains there is no virtue in preserving the innocence of children for a future they may never live to see. But as expectations rise and the pressure mounts on Ender, we begin to see that even as significant a goal as saving the human race can lose its power to motivate:

Ender: Send me home colonel or I will resign.
Graff: Don’t threaten me boy. I’m not the enemy.
Ender: I’m not so sure. I don’t want to play this game any more. I quit.

And though this is Ender’s story, I felt a great deal of empathy for Graff at this point. We may not be preparing our children to battle Buggers from outer space, but Christian parents regularly experience situations like this one. Teaching little ones to pray, cajoling them to take part in family Bible studies, challenging them to think about their friends’ souls, insisting they get out of bed for church… each discipline cuts across their natural inclination to just have fun and can result in Ender-like accusations. But each is also designed to prepare them for a world that is hostile to God, to help them discover the courage of their convictions and to prepare them lead others in a world that also has an expiry date.

But if there’s one lesson Ender learns by the end of the film, it’s that any struggle has to be backed by a personal conviction. Discipline has a limited value; following orders will only take you so far. Ender tells Graff it’s not enough to win, “It matters how you win.” You have to have a good reason for fighting if you hope to have any joy in the victory. I would hope my boys learn that same lesson in the spiritual battle opening up before them. I can teach them the techniques for spiritual warfare but they won’t do them any good if they don’t know the King they’re fighting for.

Watching Ender's Game with your kids